You are here: Home / General / The Expat-Hater: A New Brand of South African In the past, every now and again, some expat would write a letter talking about their new life outside South Africa. They would touch on the positive aspects of their new life, which would also usually be the exact opposite of the reasons they left South Africa.

Then followed the inevitable comments… some sympathetic to the author, but others… oh boy… according to them, the author is a chicken and a no-good traitor who ran away from South Africa and without whom South Africa is so much better off!

Now News24 seems to have opened the floodgates by openly inviting expats to write about their experiences as expats. They did, and so did the anti-expat commentators!

Out of all this, five groups of people seem to have emerged:

It is the last group, the expat-haters, that intrigues me.

If you read a letter written by an expat who was asked to, or decided to write about his or her experiences as an expat, what do you expect he or she will say? Will he write about how good he had in South Africa? Maybe (and fair enough, it can’t all be bad), but there will likely be some negative stuff too. They left the country, afterall!

Why all the hate? Why are they so unwilling to acknowledge that all might not be well and damn anyone who says it? Are they perhaps closet-expat-wannabes? 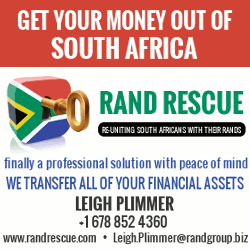