Last year, South Africa’s ANCYL leader, Julius Malema started making a lot of noise about nationalization, and specifically, the nationalization of the mines, a major source of revenue for the country, and the possible establishment of a state mining company.

At the time, as this article suggests, South African President Jacob Zuma said that nationalization is not ANC policy, and that the ANC has not shifted its policy on nationalization.

In this recent article published in News24, Prof. Jonathan Jansen, the rector of the University of the Free State, is reported as saying that racial tension is building in South Africa, comparing it to a volcano waiting to erupt.

Eugene Terre’Blanche, the well-known, charismatic leader of the AWB was murdered on his farm outside Ventersdorp in South Africa over this past weekend (April 3, 2010).

This seems to have set off a firestorm in South Africa, especially amongst AWB members and supporters, who regard this murder as “a declaration of war by black people on white people.”

I started my day out quite happily this morning. Central Texas had a great snow day yesterday, everything seemed so fresh and clean outside when I dropped the kids off at school.

I was ready to take on the day and have a good one… until I saw a news report on Fin24.com… 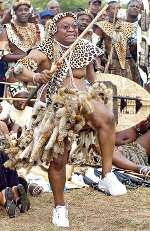 South Africa’s president, Jacob Zuma, has a long history with the ladies and he adds more episodes on a fairly regular basis.

Zuma is a polygamist. In January 2010 he married his 5th wife, and no, the first four wives are not deceased (except for wife #1), and neither is he divorced from them. He is apparently also already engaged to what will be wife #6.

You know who Julius Malema is, right? If you haven’t been in South Africa for a while, and you don’t really follow the news there, you might not know.

So let me tell you…

He’s the fellow on the right. He is also the controversial leader of the ANC Youth League, with a love for radical statements and threatening anyone he does not agree with.

Have you ever heard about the Texas Potjie Festival and wondered what it was all about? Well, wonder no more! Check out this video to see for yourself!

We took a trip to South Africa during July 2009, primarily to visit family, but also to do some sight-seeing and to show our kids some of the beauty of South Africa.